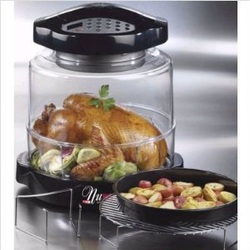 A NuWave Cooker is an infra-red oven that cooks 50% more quickly than a conventional oven. You can cook pretty much anything in it - roast chicken, fish, steaks, baked potatoes, you name it. And it saves energy compared to conventional ovens.

The picture left shows the Black NuWave Pro Digital Oven with Extender Ring.
This set includes the Nu-Wave oven with a 1.25 inch cooking rack, base tray, liner pan, and dome holder, plus an extender kit which includes a 3 inch extender ring, 10 inch non-stick baking pan and a 2 inch cooking rack.

It's enough to cook a Thanksgiving turkey of up to 16 pounds. You also get a 50 page nuwave oven recipe book and an owners manual.

The transparent dome allows you to watch the food cooking - indeed if you have a power source near your dining table, you can cook the meal on the table. Best of all, it doesn't heat up your kitchen the way conventional ovens do (which is useful during summer).

Nuwave are not the only brand making halogen turbo ovens. You can also get a version by Secura who make a Halogen Infra-red countertop oven, a Morningware infra red oven and a Tayama infra red cooker. The main difference is that the Secura Oven has a glass bowl rather than a plastic bowl like the NuWave one, which is easier to clean and healthier. Many people report that the Secura oven is superior to the Nuwave one.

The Morningware Oven has parts that can be cleaned in a dishwasher, and comes with digital timers which automatically switch the oven to low when the timer is off, to keep food warm till you turn the oven off. It comes with cooking charts and recipes included.

The Tayama Turbo Oven is an inexpensive turbo oven that works just as well as the NuWave (though it is way cheaper). The glass bowl is made in France. If you are on a tight budget, this one is the best for you.

See below for all the prices:
There's a whole bunch of Nu Wave recipe instruction videos on YouTube. Here's part 1 of a five video series with Chef Harry (the next video in the series will show up when this video ends):
nuwave cooker
Powered by